This series of 3 public lectures features experts on political violence and strategies for the guarantee of human rights and peacebuilding in Latin America and in the U.S.-Mexico Borderlands. The talks all give accounts of the implications of political violence, the connections between the long- term effects of war to the migrant crises of today, and ways in which local communities organize and respond to efforts for justice and peace. 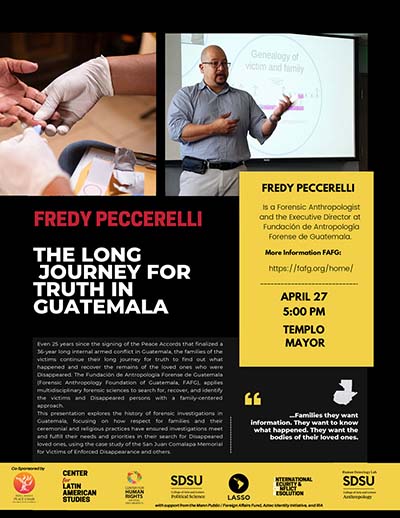 The Long Journey for Truth in Guatemala

Even 25 years since the signing of the Peace Accords that finalized a 36-year long internal armed conflict in Guatemala, the families of the victims continue their long journey for truth to find out what happened and recover the remains of the loved ones who were Disappeared. The Fundación de Antropología Forense de Guatemala (Forensic Anthropology Foundation of Guatemala, FAFG), applies multidisciplinary forensic sciences to search for, recover, and identify the victims and Disappeared persons with a family-centered approach.

This presentation explores the history of forensic investigations in Guatemala, focusing on how respect for families and their ceremonial and religious practices have ensured investigations meet and fulfill their needs and priorities in their search for Disappeared loved ones, using the case study of the San Juan Comalapa Memorial for Victims of Enforced Disappearance and others. 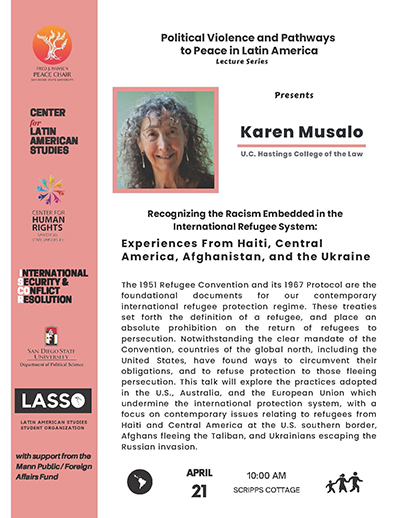 Recognizing the Racism Embedded in the International Refugee System: Experiences From Haiti, Central America, Afghanistan, and the Ukraine

The 1951 Refugee Convention and its 1967 Protocol are the foundational documents for our contemporary international refugee protection regime. These treaties set forth the definition of a refugee, and place an absolute prohibition on the return of refugees to persecution. Not withstanding the clear mandate of the Convention, countries of the global north, including the United States, have found ways to circumvent their obligations, and to refuse protection to those fleeing persecution. This talk will explore the practices adopted in the U.S., Australia, and the European Union which undermine the international protection system, with a focus on contemporary issues relating to refugees from Haiti and Central America at the U.S. southern border, Afghans fleeing the Taliban, and Ukrainians escaping the Russian invasion.

The Rogue Border: Legal and Political Violence of Border Enforcement in the Age of Asylum

The U.S. Mexico border has undergone a dramatic transformation. Since 2014, when women and children leaving Central America began to request and receive asylum there has been a shift away from individuals crossing the border and attempting to evade detection and live and work in the United States without documentation. This has led to more people seeking to turn themselves in to a Border Patrol agent, to begin the process for applying for asylum rather than evading detection. This talk will explore how border enforcement has essentially inverted its role from preventing people from ostensibly “breaking the law” by entering the United States without authorization, to instead focus on preventing people from accessing their legal right to asylum.

Co-sponsored with the Hansen Peace Chair, the Center for Human Rights, International Security and Conflict Resolution, the Department of Political Science, and LASSO. 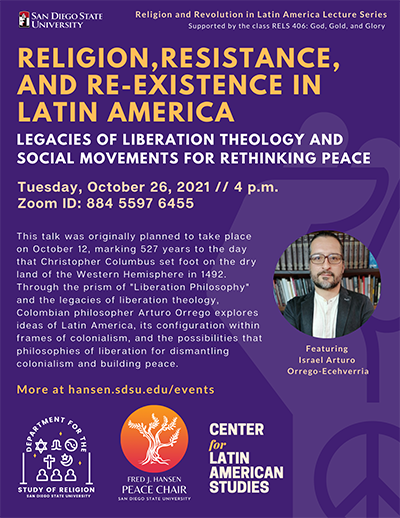 This talk was originally planned to take place on October 12, marking 527 years to the day that Christopher Columbus set foot on dry land of the Western Hemisphere, in 1492. Through the prism of "Liberation Philosophy" and the legacies of liberation theology, Colombian philosopher Arturo Orrego explores ideas of Latin America, its configuration within frames of colonialism, and the possibilities that philosophies of liberation for dismantling colonialism and building peace. The lecture will also consider Latin American "identities" and the relation with diasporic communities in the United States, and the fraught relationship between United States imperialism and the intimacies of connection between the U.S. and Latin America.

Israel Arturo Orrego-Ecehverria is professor of philosophy, theology, and education at the National University of Colombia-Distance and the Free University of Colombia. He is co-leader of the research group Tlamatinime and the Center for Education for Development. Orrego is on the board of directors for the South American Association of Philosophy and Theology. He is the author and co-author of various books and articles, mostly focused on Education for Development from a Latin American perspective, political ontologies, and philosophy of liberation.

Part of the Religion and Revolution in Latin America Lecture Series, Supported by the class RELS 406: God, Gold, and Glory 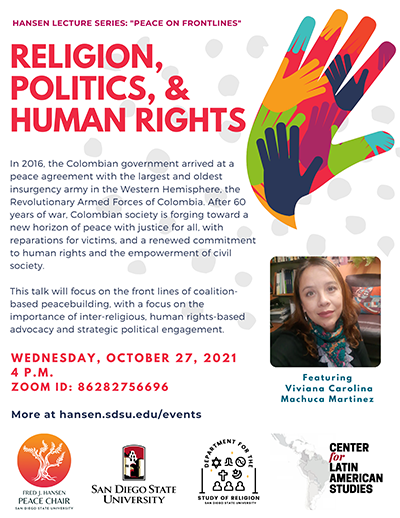 In 2016, the Colombian government arrived to a peace agreement with the largest and oldest insurgency army in the Western Hemisphere, the Revolutionary Armed Forces of Colombia. After 60 years of war, Colombian society is forging toward a new horizon of peace with justice for all, with reparations for victims, and a renewed commitment to human rights and the empowerment of civil society. This talk will focus on the front-lines of coalition-based peacebuilding, with a focus on the importance of inter-religious, human rights-based advocacy and strategic political engagement.

Viviana is the Director of Inter-institutional Relations and Advocacy at World Vision Colombia, and is a civil society representative and advocate in areas of Youth and Child Empowerment and Protection with the National Family Welfare System. She has degree in Theological Sciences and holds an MA in Latin American Philosophy, with emphasis in Human Rights, Peace-building, and Gender Studies.

Part of the Hansen Lecture Series: "Peace on Frontlines" 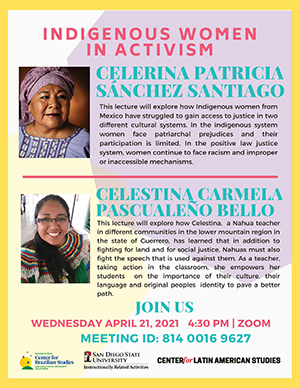 Celerina Patricia Sanchez Santiago is Ñuu Savi activist from Mesón de Guadalupe, municipality of San Juan Mixtepec, District of Santiago Juxtlahuaca, Oaxaca. She will present on the impact of indigenous women’s activism and how today, in Mexico, there is a big discussion and movement that once again brings to the table the viewpoints of indigenous women and their relationship with Mexican society.

Celestina Carmela Pascualeño Bello is Nahua educator from the low mountain region in the state of Guerrero, Mexico. As a teacher in indigenous communities, she has been entrusted  with an invaluable task. She has learned that in addition to fighting for land and social justice, she must also teach Nahua children to fight the speech that is used against them. Celestina takes action beyond her classroom, and empowers girls and boys on the importance of their culture, their language and cultural identity, to start a better path.

This event will be in Spanish.

Sponsored by the Center for Latin American Studies and the Behner Stiefel Center for Brazilian Studies.  Made possible by the SDSU Instructionally Related Activities fund.

The Kadiweu are an indigenous people currently living between the Paraguay River and the Bodoquena Mountains in Mato Grosso do Sul , Brazil. Viviane Luiza Silva’s talk will analyze Kadiweu pottery production in relation to the cultural, environmental, political, and economic contexts of Kadiwéu women’s labor.

Viviane Luiza Silva is a researcher at the Foundation for Support and Development of Education, Science, and Technology, Mato Grosso do Sul (FUNDECT/MS). She is a Ph.D. Candidate in Anthropology at the University of Manitoba. 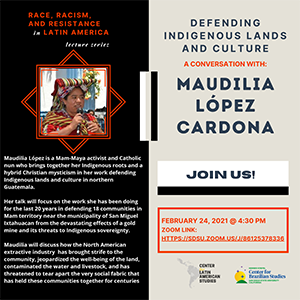 Maudilia López is a Mam-Maya activist and Catholic nun who brings together her Indigenous roots and a hybrid Christian mysticism in her work defending Indigenous lands and culture in northern Guatemala.  Her talk will focus on the work she has been doing for the last 20 years in defending 18 communities in Mam territory near the municipality of San Miguel Ixtahuacan from the devastating effects of a gold mine and its threats to Indigenous sovereignty. Maudilia will discuss how the North American extractive industry has brought strife to the community, jeopardized the well-being of the land, contaminated the water and livestock, and has threatened to tear apart the very social fabric that has held these communities together for centuries.

Dr. Jerry studies the relationships between race and citizenship and investigates the influence that regional discourses of race and racism have on citizenship practices and overall access to citizenship. This lecture will explore how the concept of citizenship allows for a richer understanding of blackness in Mexico, the relationship of the black subject in the construction of mestizaje, and the manner in which a perceived Afro culture serves as the basis for the Mexican state’s control over Black identities. 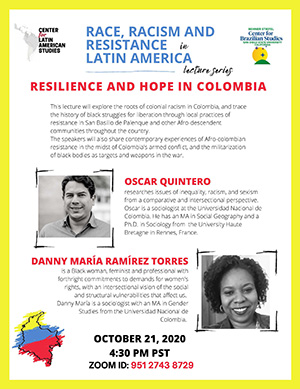 This lecture will explore the roost of colonial racism in Colombia, and trace the history of Black struggles for liberation through local practices of resistance in San Basilio de Palenque and other Afro-descendent communities throughout the country. The speakers will also share contemporary experiences of Afro-Colombian resistance in the midst of Colombia’s armed conflict, and the militarization of black bodies as targets and weapons in the war. 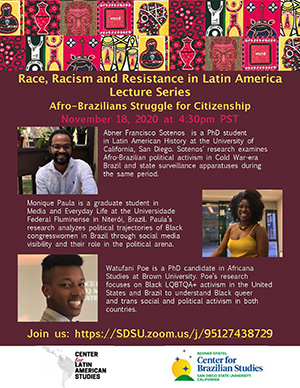 Indigenous Women and Sustainability in the Brazilian Amazon lecture series 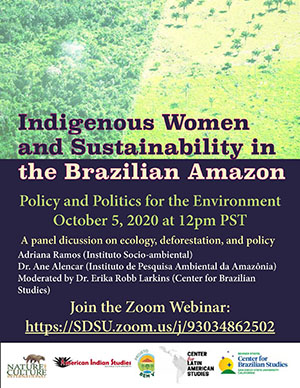 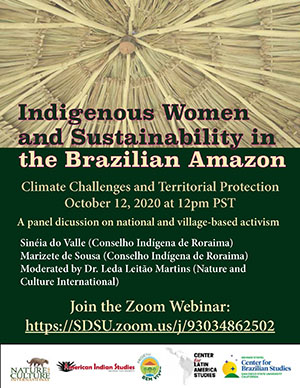 A panel discussion on national and village-based activism, featuring Sinéia do Valle and Marizate de Sousa and moderated by Dr. Leda Leitão Martins. 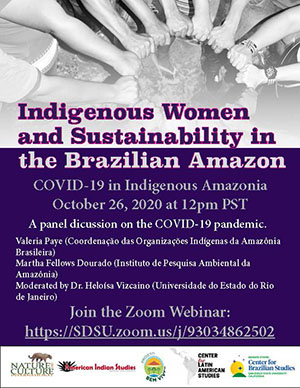 A panel discussion on the COVID-19 pandemic featuring Valeria Paye and Martha Fellow Dourado. Discussion to be moderated by Dr. Heloísa Vizcaino.

Congratulations to all of the students who participated in the 2020 Student Research Symposium and to our award winners:

Below are the titles of our students’ projects, for more information and the project abstracts see the SRS official website. 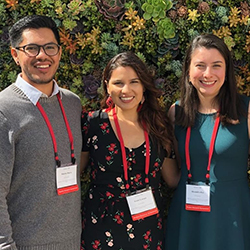 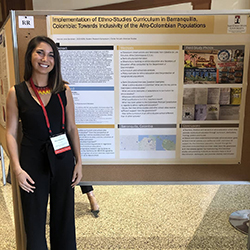 Other News In Brief